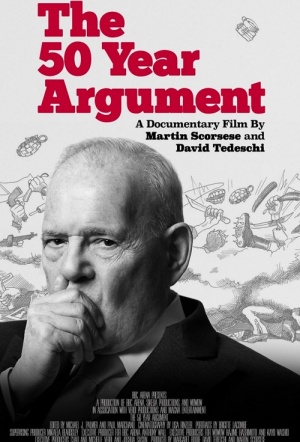 Martin Scorsese and David Tedeschi team for a documentary about the influence of The New York Review of Books, and the intellectuals that passed through its pages.

"Founded in 1963, The New York Review of Books is a sanctuary for writers and a beacon for readers, covering the world of ideas and stirring whirlwinds of debate. Among its devoted readers is Martin Scorsese, who took an interest in its very first year. Now he teams with David Tedeschi (editor on Scorsese's Rolling Stones documentary Shine a Light) to direct The 50 Year Argument. Scorsese and Tedeschi's new documentary pays tribute to the publication's fifty-year history, featuring a wide array of interviews with the magazine's international contributors, all of whom exemplify the power of language to provoke, illuminate and effect change." (Toronto International Film Festival)

SS substantial and surprisingly accessible browse through half a century of The New York Review of Books. If only there were more of it.

Scorsese celebrates 50 years of The New York Review of Books in this incisive portrait of a vanguard cultural institution.