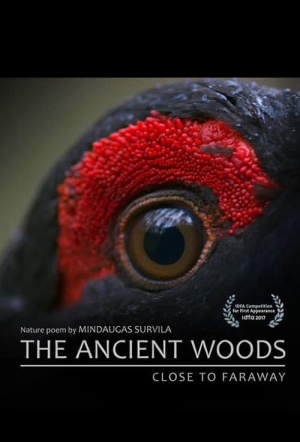 Nature documentary from documentarian Mindaugas Survila (The Field of Magic), filmed in one of the last remaining patches of old growth forest in Lithuania.

"The setting is dense, old growth woods, rich with wildlife – on the ground, in the air and in the water. As seasons shift, creatures follow their eternal routines of foraging, grooming and raising their young. The camera, in almost-surreal detail, captures the forest’s endurance and undeniable beauty – the capercaillie’s red brow, the flight of an owl, an insect emerging from melting snow. There’s no commentary, only birdcalls and the sound of the wind. Lithuanian biologist turned filmmaker Mindaugas Survila spent almost ten years making The Ancient Woods, often taking weeks to capture the right shot. His patience and unerring eye has resulted in an enchanting, meditative documentary experience." (Sydney Film Festival)