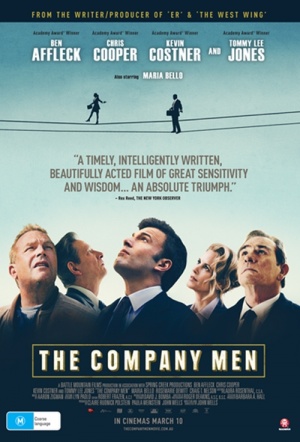 Drama about corporate high-flyers who find themselves jobless once the 2008 recession hits. From the producer of TV's The West Wing, starring Ben Affleck, Mario Bello, Tommy Lee Jones, Chris Cooper and Kevin Costner.

The pain feels cushioned and secondhand, the characters are not terribly sympathetic or interesting other than for their misfortune, and the film shows little interest in analyzing the situation other than to point fingers at greedy CEOs.

An impressive ensemble cast come together in this film about downsizing and the effects it has on a man's psyche.

While it may not have quite the quotability of Glengarry Glen Ross, John Wells’ first movie is a very modern and equally depressing tale of corporate downsizing and CEO tyrants.

The movie is realistic enough to make all corporate climbers, but especially men over 50, quake in their boots. If you are what you do, what are you if you're no longer doing it?

Although the actors are convincing and the film well-crafted, The Company Men delivers few satisfactory character portraits because the movie isn't really about characters, it's about economic units.

Wells knows how to extract the goods from a great cast, but it's in service of a somewhat mundane story. Still, it'll make you think about the imbalance in the business world, even if the arguments and consequences are nothing all that revolutionary.

The cast doesn't treat The Company Men like a slideshow. They take something overly schematic and imbue it with real anxiety, shame, and humility.