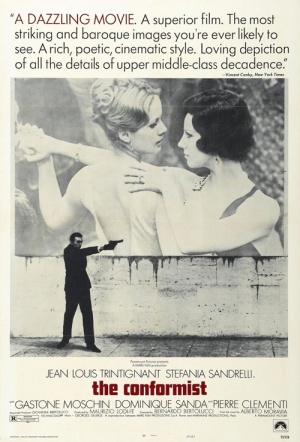 Sex, politics and violence are all connected in this 1970 drama from Oscar-winning Italian filmmaker Bernardo Bertolucci. Based on the novel by Alberto Moravia, which Bertolucci fashioned into an Academy Award-nominated screenplay.

"Basically, it’s the story of a coward," says Variety "one of the thousands (millions?) who have, for self-aggrandizement or mere safe-playing self-preservation, ‘conformed’ to the transient ideological dictates of their times. Marcello (Jean-Louis Trintignant) is such a coward. Just married (also a compromise), he’s sent to Paris by the Fascist espionage organization he’s joined and ordered to murder a leftist political refugee he once studied under in college, but procrastinates, his mind riddled with doubts and fears, his body attracted by the intended victim’s pretty wife who, possibly to save her husband’s life, seduces both Marcello and his bride."

Windup is likewise redundant, and the weakest factor in an otherwise very satisfying powerful film.

Visually lush... Stylistically exhilarating... It is a pity that the scenario cannot quite meet the demands of the mise en scene...

In a story full of treachery, cowardice and sexual decadence... the movie remains uplifting for its breathtaking style.