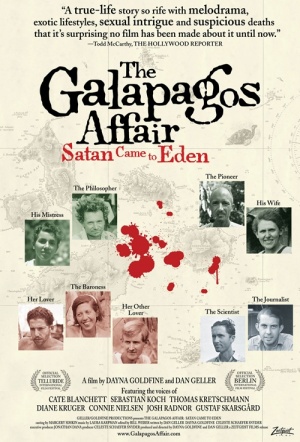 Documentary exploring the curious goings-on when a Berlin doctor and his mistress dropped out of society and resettled in the Galapagos Islands in the 1930s. Followed by others, soon an experimental, free-love society flourished – until some of the new arrivals disappeared and allegations of murder began to swirl in the air. Filmmakers Dayna Goldfine and Dan Geller (Ballets Russes) delve into what took place by assembling archival footage, modern testimony, and utilising voice talent including Cate Blanchett, Diane Kruger and Connie Nielsen.

This pulpy 1930s mystery makes up only a fraction of this disorganized docu.

Never yokes all these threads into anything particularly deep or illuminating... less social commentary, more gossip.

The lessons, although obvious, bear repeating.

May be rather too padded with tangentially linked contemporary interviews, but at its heart there is some wonderful material and a gripping real-life story.

A bizarre real-life drama of the 1930s is well told in this resourceful documentary.