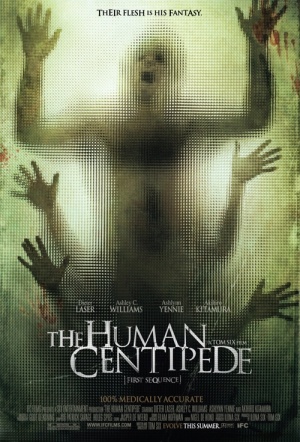 "The most disgusting film at this year’s Festival is also possibly one of the funniest, with a sick conceit that will have you either clambering for a ticket or running a zillion miles in the opposite direction. Two attractive but ditsy American gal pals are traveling through Germany when their car breaks down. Luckily for them Dr Heiter welcomes them into his isolated villa. Unluckily for them, he’s a nutjob with aspirations of inheriting Josef Mengele’s mantle. His truly vile plan is to create a fully functional human centipede using random captives who have their kneecaps surgically removed and their mouths sewn to the anus of the lucky person in front of them. Are you still reading this? The Human Centipede is riotously unhinged, with a performance from Dieter Laser (whose face resembles Lance Henriksen and a smashed crab) that cements his position in the upper echelon of movie psychos." (New Zealand International Film Festival 2010)

Only real payoff is seeing the monstrosity assembled, and though that will surely earn the Dutch writer-director a cult reputation on the genre circuit, "going there" does not a movie make.

Shocking, funny, disturbing, Centipede is a throwback to the glory days of Cronenberg. Yes, it’s a one-idea movie but what an idea.

Six has now made a film deliberately intended to inspire incredulity, nausea and hopefully outrage. It's being booked as a midnight movie, and is it ever. Boozy fanboys will treat it like a thrill ride.

Dieter Laser is grand as the doc, a character Christopher Walken would be comfortable doing, and Akihiro Kitamura provides laughs as the first part of the centipede.

Crosses the line from horror to just plain sick.

This will not appeal to everyone, whether it will appeal to anyone is another question. With dark humour from time to time, underneath an extremely repulsive concept, this is a relatively conventional horror movie.

Be Afraid. Be Very Afraid.