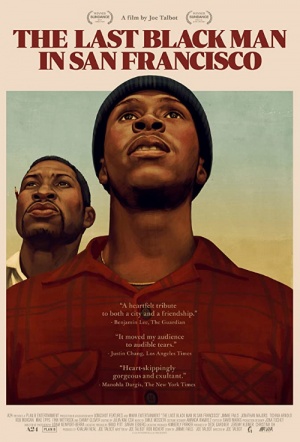 A young man looks to reclaim an old house he holds dear in this Sundance-winning drama, but the city has changed almost beyond recognition.

Jimmie Fails dreams of reclaiming the Victorian home his grandfather built in the heart of San Francisco. Joined on his quest by his best friend Mont, Jimmie searches for belonging in a rapidly changing city that seems to have left them behind. As he struggles to reconnect with his family and reconstruct the community he longs for, his hopes blind him to the reality of his situation.

Talbot is a striking filmmaker, giving his film both a lived-in authenticity - the location work is evocative, and he's filled the screen with oddball locals - and a fairy-tale hermeticism.

While Talbot and Fails claim to have walk-and-talked their way all over San Francisco, the script — and especially the dialogue — is the most disappointing element of their first feature.

A shot of a lonely man rowing through choppy waters under the Golden Gate Bridge sends things into the realm of purest urban poetry.

It’s a shaggy, wistful film that acts as a heartfelt tribute to both a city and a friendship...

Talbot, Fails and their collaborators have given the programmers, and us, an undeniable gem. It plays like a gauntlet that's been thrown down. But it feels like a gift.

Talbot has a gift for making twee material feel true, but his grip weakens during the pivotal home stretch of his debut, and as a result the ending doesn’t land with the emotion it deserves.

This is a highly calculated and worked-out story, but the humor and lively playing of the entire cast keeps the film aloft across its two hours.