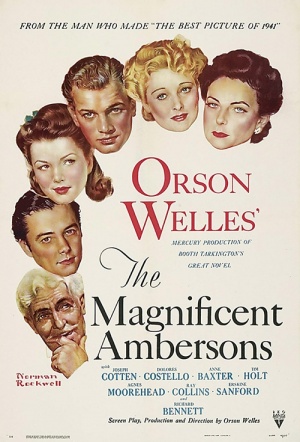 Orson Welles' majestic follow-up to Citizen Kane, based on Booth Tarkington's tragic novel on the declining fortunes of the Amberson family in 1870s America, set against a backdrop of progress as the 'horseless carriage' takes over the country.

Famously, the picture was recut by its studio - RKO - while Welles was away in Brazil. The edits removed over an hour of footage (later destroyed) and added an upbeat ending. Welles would go on to say the end result looked as if it had been "edited by a lawnmower". The editor (who under orders from the studio) was Robert Wise, would go on to direct The Sound of Music. He maintained the final version was superior to the original. Despite the mangling, the film was nominated for four Oscars including Best Picture.

Welles devotes 9,000 feet of film to a spoiled brat who grows up as a spoiled, spiteful young man... it piles on and on a tale of woe, but without once striking at least a true chord of sentimentality.

What remains is inevitably, irritatingly uneven, but still tender and insightful. It will cut you up.

Hacked about by a confused RKO, Welles' second film still looks a masterpiece.