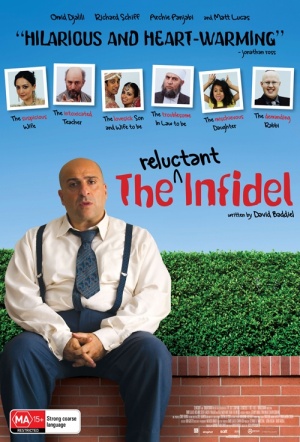 British comedy about Mahmud (Omid Djalili) who may not be the most observant Muslim, but is a true believer deep down. Scandal strikes when he learns he was adopted, and what's more: his birth mother was Jewish. And his given name was Solly Shimshillewitz! As Mahmud tumbles into a full-scale identity crisis, a comedy of religious errors unfolds.

The Infidel takes some all-too-predictable detours into moralizing and sentimentality, but remains consistently sharp as long as it sticks to its acerbic tone and saucy comic sensibility.

The Reluctant Infidel is cross cultural comedy at its very best - and occasionally at its most predictable.

There are titter-worthy moments, but it’s too strenuously measured to really bring the house down.

The director, Josh Appignanesi, has a nice sense of comic timing, slipping in some of the best jokes when you least expect them.

A would-be provocative satire that too often settles for sitcom-grade silliness, The Infidel represents an opportunity wasted.

Funny and unthreatening, it's not subversive but it's plenty of fun.