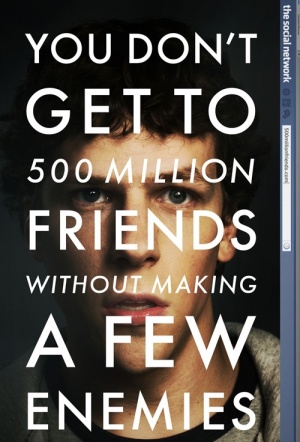 Drama about the founders of Facebook, directed by David Fincher (Zodiac, Fight Club) and starring Jesse Eisenberg (The Squid and the Whale) as Mark Zuckerberg. Based on the book The Accidental Billionaires by Ben Mezrich.

Nowadays, Facebook has over 500 million members, is valued at $US 16 billion and has changed the way people interact worldwide. Here the story focuses on the company's origins – in Harvard college dorm rooms – and how overnight success and wealth impacted on Facebook's founders.

“Every creation myth needs a devil,” notes one of Mark Zuckerberg’s attorneys as the Facebook creator resigns himself to legal defeat. The Social Network is the story of one man’s God complex igniting his demonisation. It’s what happens when anarchy is assimilated – how rebellion gets contorted into money.

“Every creation myth needs a devil,” notes one of Mark Zuckerberg’s attorneys as the Facebook creator resigns himself to legal defeat. The Social Network is the story of one man’s God complex igniting his demonisation. It’s what happens when anarchy is assimilated – how rebellion gets contorted into money.

But make no mistake, whether the movie is fair or horribly unfair - I know nothing of the actual facts and can't make that determination - its portrait of Zuckerberg is a hatchet job of epic and perhaps lasting proportions.

David Fincher's film has the rare quality of being not only as smart as its brilliant hero, but in the same way. It is cocksure, impatient, cold, exciting and instinctively perceptive.

Master director David Fincher (Fight Club, The Game) mines big drama out of the origins of Facebook in this entertaining zeitgeist-grab

Smartly written by Aaron Sorkin, directed to within an inch of its life by David Fincher and anchored by a perfectly pitched performance by Jesse Eisenberg, The Social Network is a barn-burner of a tale that unfolds at a splendid clip.

One of cinema’s greatest strengths is that it can make the ordinary and mundane exciting and adventurous. It’s a rare thing though, and when you see it, sometimes it’s difficult to figure out how it happened. In the case of The Social Network there’s no trick.

The film comes down to a mesmerizing portrait of a man who in any other age would perhaps be deemed nuts or useless, but in the Internet age has this mental agility to transform an idea into an empire.

A rich, understated character drama that gleefully exposes the petty playground politics at the centre of one of the internet-era's most bitter court cases.

I just came across a lovely quote from the writer of The Social Network, and it seems it's a fair place to start this review - fair because the real star of this film is the script.

Absolutely riveting examination of the social media phenomenon that is Facebook.