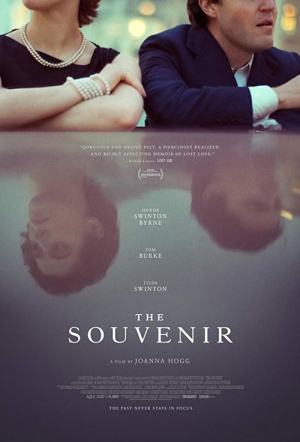 "Between script pitches and camera setups, Julie hosts a film-school cohort party where she meets a mysterious man named Anthony. A few days later, Anthony invites Julie to a grand hotel and asks to stay with her for a few days. Thus begins Julie’s first serious love affair. Ignoring her friends and borrowing large amounts of money from her parents, Julie surrenders to the relationship and prioritizes Anthony’s needs." (Sundance Film Festival)

Achingly well-observed in its study of a young artist inspired, derailed and finally strengthened by a toxic relationship...

All of The Souvenir's brief, lilting tesserae coalesce into a richly affecting whole, an elegy for a lost love and a humble appreciation of, and reconciliation with, one's own early fumblings into adult life.

To watch Swinton-Byrne's 24-year-old Julie - angelically innocent, soft in voice, curious, a touch embarrassed by her Knightsbridge privilege - is to make the kind of immediate heart-to-heart connection with an actor that only the movies can broker.

Refrigerated and mysterious: uncompromising, uningratiating: an artefact in the highest auteur register, but a film that creeps up on you – from behind.

One of the pleasures of Hogg's movie is how sneakily it takes shape, and how carefully it avoids the obvious beats to which storytellers often resort for the sake of dramatic expedience.

This is an illuminating (self-)portrait of a young artist as well as a mesmerizing chronicle of a consuming, destructive relationship that steadily inches its way under the viewer's skin.