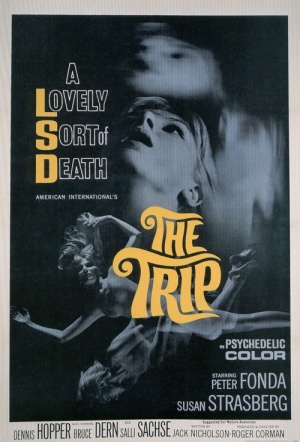 Made in 1967 and setting out to capture the psychedelic sixties, set alight by widespread LSD consumption, this cult film follows a television commercial director (Peter Fonda) through his first experience on acid. Written by Jack Nicholson and directed by Roger Corman who made sure they “researched” the subject thoroughly.

Paul (Fonda) is splitting from his wife, and in a state of heartbreak and distress makes the possibly ill-advised decision to take acid. Initially looked after by a “guide” (Bruce Dern), Paul inevitably freaks out and finds himself adrift in the nightlife of the Sunset Strip. Experiencing revelations about his life, not to mention psychedelic visions, Paul is set to end his night out a changed man.

Rich pickings for the pathologist of '60s life-styles, but it took Coppola to work out that the best movies were about bad trips, not good ones.

In trying to visualize a notion of what Peter Fonda goes through on an LSD trip, Corman has simply resorted to a long succession of familiar cinematic images, accompanied by weird music and sounds.