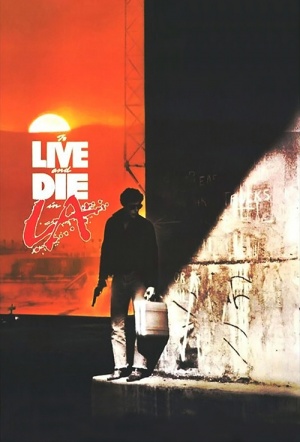 William Peterson, Willem Dafoe, John Turturro and a protracted car chase star in this '80s crime flick from the director of The French Connection.

"Hot Dog" special agent Richard Chance (Petersen) of the Secret Service is out to arrest and convict an arrogant counterfeiter (Dafoe) who has eluded the law for years and who flaunts his success. Dafoe has been asking for a down payment on a sale of bogus bills, but the amount is larger than the service can authorise to entrap Dafoe in a "sting" operation. Chance is forced to set up a dangerous plan to steal the advance money from another crook (Turturro) and use it to buy bogus bills and bust the counterfeiter. As the soundtrack by new wavers Wang Chung accompanies proceedings, the distinction between the pursuing law enforcers and the pursued criminals blurs.

Engrossing and diverting enough on a moment-to-moment basis but is overtooled.

Friedkin plays it as brutal and cynical as he ever did with The French Connection...

On its own terms, it's a considerable success, though it's a film that sacrifices everything in the interests of style.

This is his [Friedkin's] comeback, showing the depth and skill of the early pictures.

The film never recovers momentum after the drive-about, and winds down rather than resolves.