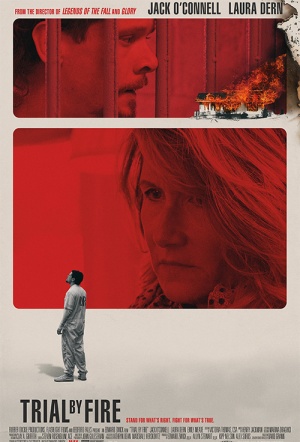 Laura Dern and Jack O'Connell ('71) star in this true story drama about a Texas man who was executed after forensic evidence and expert testimony were suppressed.

Convicted for the alleged 1991 murder of his three young children and arson at his family home, John Todd Willingham was eventually executed by lethal injection in 2004. Following his death, his case has received significant media attention surrounding misinterpretation of evidence and the alleged corrupt handling of the case by the prosecution.

The film plods at points, trudging along, and there are a few misguided narrative 'devices' tacked on.

There's that masterpiece of a micro-performance by Jeff Perry, in that single scene. That alone is worth the price of admission.

The movie is painstakingly well made and murderously hard to sit through.

The performances are inspired.

Forces Willingham through a kind of poetic transformation.

What Zwick lacks in artistry, he makes up for in anger, and Trial by Fire burns with a righteous fury that spreads right off the screen.

Without flair or fresh insights into its chosen subject, this just seems like spinning more wheels about on oft-discussed subject.