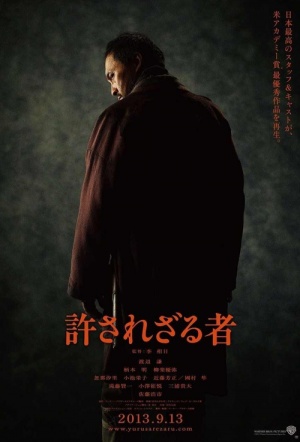 Set in late 1800s Hokkaido, Jubei Kamata (Watanabe), a former swordsman of the shogunate, slaughters countless rebels under orders, earning a fearsome reputation. Following the government's collapse, he vanishes without a trace, eluding the determined efforts of the new government to capture him. A decade later and the feared swordsman is an isolated farmer living with his wife and children. Although having vowed to never kill again, when Kamata's wife passes away and he's faced with poverty, the swordsman takes up his weapon once more to find work as a bounty hunter.

May lack the austere, classical weight of the original, but it makes up for it in visual splendour. Unexpectedly brilliant.

Lee's version offers enough grand spectacle and historical intrigue to carve its own space in the international multiplexes.

It's an enduring yarn, well told: a rare remake that functions independently, even as it reminds you - vividly, in places - of the original's elegiac pleasures.

The samurai/Western osmosis is given a terrific new surge by this beautiful-looking, smartly modified translation.