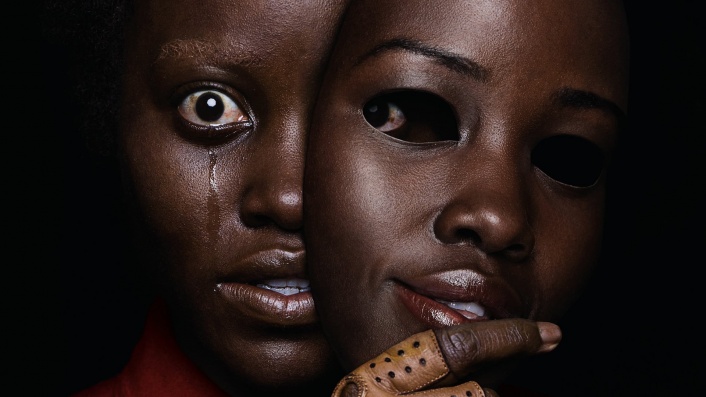 Helps you find yourself in the process

The lingering effects of affluence casts a shadow which manifests physically as the restrained doppelgangers of everyday human beings. This movie succeeds in getting across the message of the guilt we, as the privileged societal dwellers, should feel for living voraciously and peacefully as our philosophical and psychological pseudo-counterparts live similarly in a completely depraved world, filled with everything that society abandoned. It is ultimately a real-life depiction of the duality of each person, where their morally-repressed counterpart is restricted to a secluded world, biologically tethered and vicariously puppeteered.

Jordan Peele's ambitious follow-up to the titular movie 'Get out' brings a varied sense of flavour which tastes sweet, bitter and sour all together. This movie packs a punch when it comes to different spectrums of representation. The key concept which is explored is derived straight from the title 'Us', translating to the human being and their equitable counterpart. This movie heavily emphasises on the strikingly different words of the humans and their doppelgangers bringing into question the morality of what is prejudice and equality. The humans enjoy the everyday privileges of a vastly accessible world while their pseudo-counterparts are restricted to a a resource-less space. As such, the movie explores class system very effectively, distinguishing the fact that our very existence of middle-to-high class lifestyle indirectly affects the poor and homeless, who resort to living underground to create their own ecosystem of normality.

However, the additional translation of 'Us' can allude to US or America, a country itself dealing with marginalisation between different races, in particular the Caucasians and African-Americans, something that Peele's second outing could imply based on its emphasis in Get Out. All of these concepts centrally allude to privilege versus non-privilege, which in itself creates high levels of horror, a feeling that creeps within our skins and forces us to feel guilt for living blatantly in the midst of freedom.

In fact, the encounter between the protagonist family and their identical counterparts heavily emphasises this concept as they shift the focus away from any cliched Horror movie house break-in to a more terrific political agenda, whereby the poor takeover their rich as a statement of equality and justice. As he focussed on racial inequality in Get Out, Peele dwells a layer deeper in this more philosophical film, uncovering the macroscopic establishments of class system to include all races. It is an interesting topic to focus on and a haunting depiction of the society we live in and the reason why this movie works for most of its entirety in frightening it's viewers with a socio-economic framework of horror. This movie works solely by making the viewers reflect on today's societal constructs and how we are all responsible indirectly for preventing the poor from achieving a better lifestyle and moral standing in society.

Irregardless of flaws in this movie its lead actress Lupita Nyong'o illuminates as the worried and guilt-stricken Adelaide. Her acting transcends any normal acting as if to place a mask on her character to hide the inner feelings she really feels, and it is here where we can relate to her character's survival instinct. However, it is her more rounded and haunting depiction of the identical Red which brings out the horrific sense of terror within this movie. Red lives and breathes in the darkness of the underground, only to come to the surface to untether herself from Adelaide. Her every dialogue is spoken with a speech impediment which feels creepy and eerie on the screen and her deeply political and righteous speech for freedom implies more terror than empathy, something that is oddly satisfying to watch in the theatres. With both of these strikingly different characters you get the sense of hidden motives and the pursuit for freedom. Equally more disturbing is their encounter which guides this narrative down a hellish ride of redemption and encapsulate a wider agenda at play.

Despite a scary interpretation for class systems and societal privilege, this movie equally balances horror with comic relief, something that we know Peele is more than familiar with. One particular scene involving the untethering of the protagonists' friendly Caucasian family is filled with surprising comedy despite the gore involved. I think that Peele understood how such a movie would make certain people feel uneased, so it is only fitting to have a comic buffer to relieve unwanted feelings. This balancing act only strengthens the final product making it suitable for a wider audience to enjoy.

With a compelling and ambitious script at hand Peele's vision is over-ridden with haunting and claustrophobic shots of the Santa Cruz Beach boardwalk, a historic landmark within which the movie mainly presides. Something as fun and adventures as this location is teeming with symbolism and illusions of eeriness, a visual craftmanship which is achieved perfectly by the creative team behind this movie. The beach itself undertakes a transformative function as it draws the titular character to the strangely present house of illusions, symbolically entitled 'find yourself'. It is infact here where the young Adelaide finds her doppelganger, a highly suspense-driven scene which mounts to unsuspecting terror.

Despite the clear focus on the double-edge sword of humanity, Peele isn't a stranger to imagery, creativity and art in this movie. the horror is equally terrifying from the visual depictions of the settings as it is in character dialogue and reactions to unsuspecting events. As stated above, the haunting outlook of the boardwalk, the beach and the eerie house of mirrors really draws the viewer closer and closer to a type of terror that resonates in our more subtle nightmares. Rather than relying on cheap scares Peele rather turns the tides and uses visual art as a transcendental mode for taking us to our most frightening settings. I could almost feel drawn to this supernatural setting, similar to the 'sunken place' in Get Out.

The idea of ourselves and our rather fictional counterparts being connected, or tethered, is itself a scary thing to imagine. this movie continues to focus on this notion of untethering as a symbolic act of freeing ourselves from us, implying that each of us carry a darkness within ourselves which, if tempted, could rise to the surface and consume our humanity from us. This hauntingly realistic visualisation of humanity is what stays with us long after the credits have finished as we constantly ask ourselves if we are worthy to live a privileged life in the absence of our more primitive forms. This is ultimately Adelaide's redemption arc as she tries to fight for her freedom to live against her own demon (Red).

Riddled with foreboding imagery, visually haunting scenery and strong character dialogue, this movie sets the bar for many other Horror movies as it strays into unknown territory. Just the thought of our evil selves existing in this world is enough to send shivers down our spines. It is only fitting to revel at the final act with an appreciation despite a shoddy execution. The final scene of this movie would create horror on a more macroscopic level and the unexpected surprise will shock the intellectual viewer for sure.

This overly ambitious movie does however have many loopholes which can undermine the final product. Not much exposure is given on the mechanisms of realism for the doppelganger counterparts who live under the Santa Cruz boardwalk. Instead of improving the authenticity of the underworld, the director instead focusses on the dialogue to mask these flaws. As such, many viewers would be left more confused than enthralled by this cinematic experience. This movie works more as a surreal experience rather than a real-life depiction of horror of the self.

For a movie which invested more time and creativity on the peripherals of this haunting concept, the core was lacking the realism that would otherwise elevate it to prestige status to the likes of Get Out. Peele's deliberate attempt to leave these flaws unhindered may be a means to leave a lot to our minds but the execution and ambiguity itself leaves a bad after-taste. It is easy to feel unsatisfied towards the final act as we are bombarded by a rather ambitious narrative for how the underprivileged doppelgangers live. The horror is there but the realism is lacking in order to create cataclysmic terror. Everything, from their costumes, their weapon of choice and their food sources are questionable as is their precise time to strike. This whimsical predicament may be unpalatable for many, but decently enjoyable for those who are not as attuned to realism and rather attuned to cinematography. 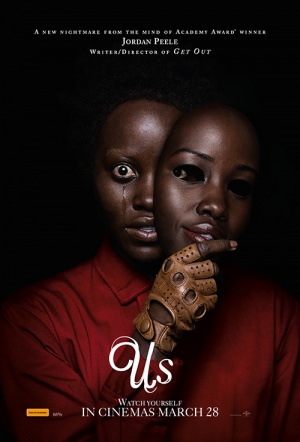