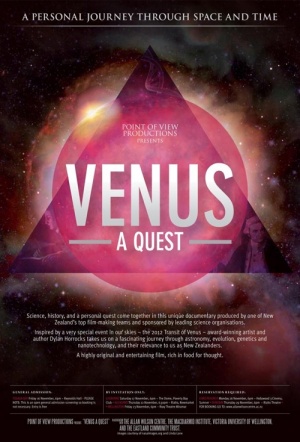 Nanotechnology meets astronomy in this personable family history from documentarian Shirley Horrocks, featuring her stepson Dylan Horrocks, the noted graphic novelist (Hicksville). The astronomer in the story is Jeremiah Horrocks (1619–41). His observation of the transit of Venus across the sun in 1639 established the method of interplanetary measurement that prompted Cook’s scientific expedition to the Pacific in 1768...

"The ramifications for Aotearoa are well known, but the ramifications for the Horrocks family in 21st-century Auckland take a little more investigation. Is Dylan related to Jeremiah? He knows he’d like to be, and like many Pākehā he needs DNA analysis and a trip to the old country to clarify his whakapapa. Meanwhile, Sir Paul Callaghan and other scientists prepare to celebrate the 2012 transit with a congress at Tolaga Bay. Dedicated to Callaghan, who did not live to see this congress, Horrocks’ engaging ramble ultimately makes a tidy case for the meaningful intersection of the personal, the historical and the cosmic in scientific enquiry." (New Zealand Film Festival)