When Love Is Not Enough: The Lois Wilson Story 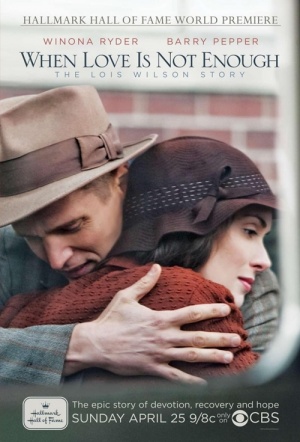 "The two married following Bill’s (Barry Pepper, Saving Private Ryan) returm from WWI. Despite concerns over Bill’s drinking, Lois believed he was destined for greatness. She believed her love and support would eventually persuade Bill to quit drinking. When he finally attained sobriety, he poured his time and energy into helping other drunks, which led to the founding of AA. Lois felt resentment that her patience and devotion were not acknowledged. After discovering the wives of other alcoholics experienced the same frustration, she co-founded her own fellowship: Al-Anon. Al-Anon assists the friends and families of alcoholics." (Official Synopsis).

Produced by CBS Television and Hallmark.

When Love Is Not Enough: The Lois Wilson Story / Reviews

Ultimately, though, the history behind AA isn't as fascinating as it needs to be to animate this sort of endeavor, leaving little to do but admire the central performances.

It's Lois' movie, and Ryder, though sweet-voiced and still heartbreakingly lovely, spends most of it looking bewildered. With her period clothing and mannerisms, she looks like a child playing dress up.

Love is a pleasant, burnished look at two intertwined lives.

That it's so hard to watch the middle third of this biopic is, in fact, a testament to its effectiveness. It renders the struggles of dealing with an alcoholic spouse painfully real.