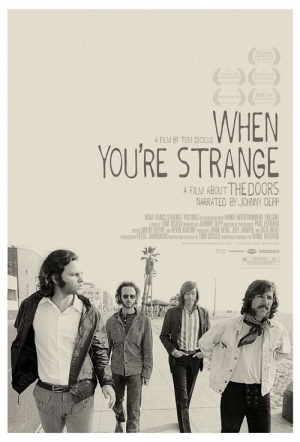 "Tom DiCillo summons the inflammatory spirit of 60s art-rock group The Doors and its blazingly beautiful frontman Jim Morrison in a brilliant collage of performance footage shot between 1966 and 1971, much of it never-before-seen.

"The singer’s elevation into a leaping and whirling Dionysian prince in dark curls, conch belt, and leather pants is one of the great operatic-erotic spectacles in rock. The film gets that drama, and the drama of his alcoholic descent as well. When You’re Strange does have one major idiosyncrasy. There are no interviews – at all. The movie is stitched together with a narration, spoken by Johnny Depp, that sounds like a highly enlightened Wikipedia entry. Yet DiCillo knows what made this band great. He does justice to the music – to the spangly stoned grandeur of ‘The Crystal Ship’ and to the dark majesty of 'Light My Fire', to every song in which Jim Morrison, with his lordly baritone, seemed to be entering heaven and hell at the same time." (New Zealand International Film Festival 2010)