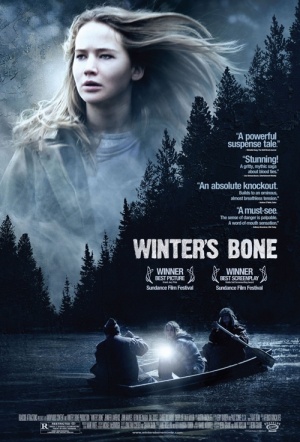 "In the harsh backwoods of Missouri, 17-year-old Ree (Jennifer Lawrence), smart beyond her years, takes care of her incapacitated mother and her younger brother and sister. When her crystal-meth-cooking father puts up the house for bail, she sets out to find him to ensure that he shows up in court. At every house she visits she’s stone-walled by some woman on the porch fronting for some guy inside. Her determination to uncover the truth behind her father’s disappearance only increases, inseparable from her determination to deliver her young siblings from the bleak expectations of their impoverished, drug-raddled kin." (NZ International Film Festival 2010)

The film's realism is a point of entry rather than the whole point of the exercise. Its setting is finally subordinate to the main character, as memorable and vivid a heroine as you are likely to see on screen this season.

The movie heroes who affect me most are not extroverted. They don't strut, speechify and lead armies. They have no superpowers. They are ordinary people who are faced with a need and rise to the occasion. Ree Dolly is such a hero.

An ice-blue cold seeps from almost every frame of this adaptation of Daniel Woodrell's 2006 novel.

Intense, immersive and in control, Winter's Bone has an art house soul inside a B picture body, and that proves to be a potent combination indeed.

A vivid reworking of Daniel Woodrell's novel that brings the book's conflicted heroine to searing life in a piece of unhurried filmmaking too rarely seen these days.

It is wrenching and unashamed drama of the very best kind. Look for it as the darkest of dark horses at the Oscars. But in the meantime, just go to see it. This might just be the finest drama of the year so far