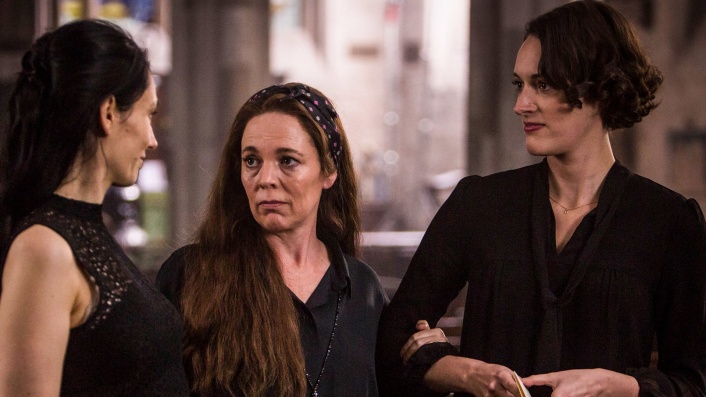 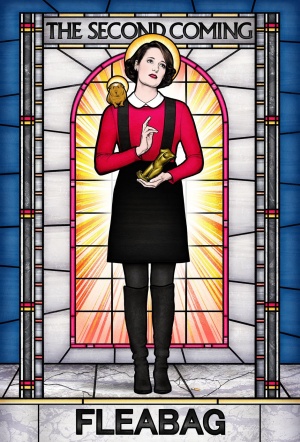 Hot priest. Two words that set the world on fire thanks to this second season of Phoebe Waller-Bridge’s award-winning comedy-drama. As preparations proceed for the wedding of Fleabag’s father (Bill Paterson) to her godmother (Olivia Colman), Fleabag finds herself distracted and aroused by the man who’s to officiate, a priest (Andrew Scott) who should be off limits… but is extremely hot (and will prove to have his own perspective on fourth wall-breaking carry-on).

Fleabag celebrates Godmother and Dad’s engagement and is intrigued by their new Priest, but the evening comes to stormy end when old tensions resurface.

A counselling session elicits an uncomfortable truth from Fleabag, and she finds herself somewhere unexpected. Elsewhere, a chat with Claire brings some unwelcome news, Martin and Fleabag face off, and Jake wonders where Claire is.

Fleabag helps with an event at Claire's work which inevitably ends in disaster, but an introduction to Claire's colleague proves intriguing. A chance meeting with a stranger opens her eyes.

The priest takes Fleabag for some quiet reflection leading to an unexpected revelation. After a day spent looking back on painful memories, Fleabag searches for solace, only to find more trouble.

Claire has a crisis and turns to Fleabag for help, whilst a familiar face makes a reappearance at the cafe. Hilary makes a friend, Martin demands answers, and Godmother and Dad’s wedding hangs in the

As the day of the wedding arrives, Jake wants to know where Claire is, and the priest upstages the bride. As secrets are revealed and decisions are made, will Fleabag find the ending she’s looking

Scott is immensely likable, and it's not hard to see how Fleabag would fall for him (as ridiculous as that may sound), but where the series ultimately takes this connection seems sketchily thought out rather than fully realized.

Season two is somehow better than the first, and Waller-Bridge's ability to blend comedy and tragedy -- often in the same scene -- makes this show unlike anything else on television right now.

Exquisitely crafted in every line and shot, it's unflinchingly mordant in its heightened depiction of everyday awfulness, but it retains at its core a vulnerable, longing sweetness you mightn't think capable of coexisting.

For a character utterly obsessed with the violence that crawls under the surface of politesse, it's a rare moment of harmony between her inner and outer selves.

The vivid portraits of human frailty, weakness and - in Martin's case - near-evil... drawn with just a handful of lines each from an unflinching, excoriating, lethally funny writer whose performers knock every one out of the park.

Waller-Bridge understands how to make Fleabag's defiance both galvanising and brittle. The emotional complexities of her trauma can be deliriously funny, while moments of self-destruction are sadly telling.

The resulting second season is a meticulous triumph as gorgeous as it is wrenching.

The show's humor remains raunchy, and the season's secular patron saint is a tough older woman who credits her comfort in her own skin to the bodily liberation of menopause.

The premiere is an early frontrunner for best episode of the season, if not the series, returning to Fleabag's theatrical roots for an evening of farce and concentrated viciousness