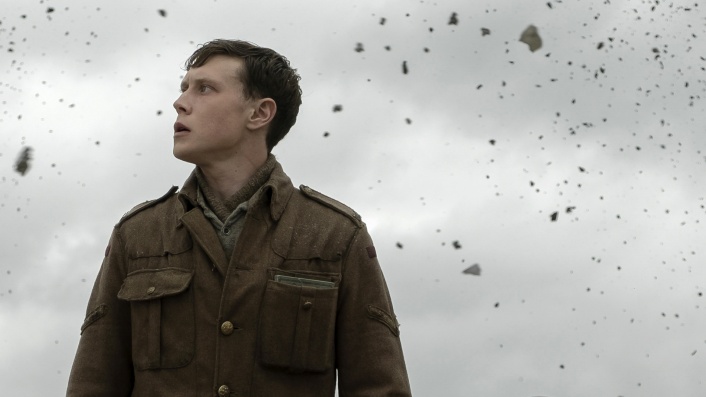 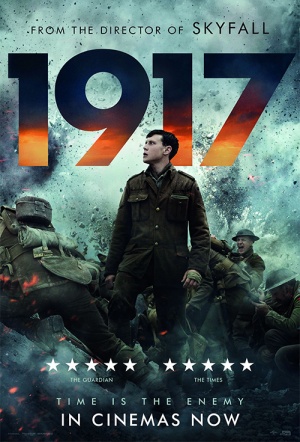 At the height of WWI, two young British soldiers, Schofield (George MacKay, Captain Fantastic) and Blake (Dean-Charles Chapman, Game of Thrones) must cross enemy territory in a race against time to deliver a message that will stop a deadly attack on hundreds of soldiers - Blake's own brother among them.

1917 works fantastically as a pulse-pounding thriller set against the backdrop of the end of WWI. Technically, it’s absolutely extraordinary, but it says very little about the war itself, or war in general, or much at all, which is a missed opportunity.

Might just be the most captivating and intense war film you've seen in decades.

A highly convincing welter of dirt, exhaustion, and decay...

One of the best war films of all time...

Surrounds the viewer in the urgent firsthand experience.

Turns one of the most catastrophic episodes in modern times into an exercise in preening showmanship.

Like watching someone else playing a video game for two solid hours...

(1917) lacks the emotional punch this story requires to make it a lasting impact.

Unfolds with considerable sensitivity, offering plenty of haunting images while capturing the chaos and fear of trench warfare...

An immersive war film that's low on plot but high on blistering action.

One leaves the cinema feeling the story in the gut.

1917 is wildly cinematic, a movie that makes you feel the breath of mortality on your neck.

A slice of prestige British film-making that nimbly avoids accusations of heritage cosiness.

At the same time exhilarating, nerve-racking and inspirational.

Thematically, 1917 is disappointingly shallow, but technically, it is undeniably impressive.

A stunning film, fully deserving of all the gongs that will end up on the already-crowded Mendes mantelpiece.

The horrors of war are driven home with urgent kinetic intimacy... It's hard to watch, but it feels important that we do.

It's an immersive, visceral and meticulously crafted film that has the emotional stakes to match.

1917 is tense, captivating, meticulous, horrifying and stirring - an exceptional achievement in filmmaking.

Inspired by a tale of war his grandad had told him, Mendes co-wrote the story with rising-star screenwriter Krysty Wilson-Cairns, a 31-year-old Scot with a deep interest in military history who has been touring European battlefields from a young age. Together, the pair have nailed that imperative for engaging war storytelling: an intimate story told within a grand and horrific context.

A triumph of style, and a beautiful looking film, it’s just a pity it didn’t have more to say.

The experience of watching 1917 is enveloping, overwhelming, confronting. I've just spent two years studying the Western Front for a book, and this recreation is hard to fault – from the ramshackle British trenches to the precision-engineered German earthworks and deep dugouts that made them so immovable.

A war film that will take you on both a physical and emotional journey, 1917 is likely to be remembered as one of the great movies of 2020.

Astonishing as his filmmaking can be at times, it's Mendes' attention to character, more than the technique, that makes "1917" one of 2019's most impressive cinematic achievements.

This is a protean display of virtuoso filmmaking, one that film aesthetes will wallow in but that even ordinary audiences will note and appreciate.

An amazingly audacious film; as exciting as a heist movie, disturbing as a sci-fi nightmare.

It may be a grandiose flourish, but you can't deny it makes for a startlingly literal theater of war.

A visceral World War I movie that is both technically masterful and emotionally devastating. It's easily the best film of Mendes' career.

Although 1917's filmmaking very much brings attention to itself, it's an astonishing piece of filmmaking, portraying war with enormous panache. This is big-screen bravado, and then some.

It's a staggering technical achievement, one that will see Roger Deakins retaining his unofficial Greatest Living Cinematographer crown.