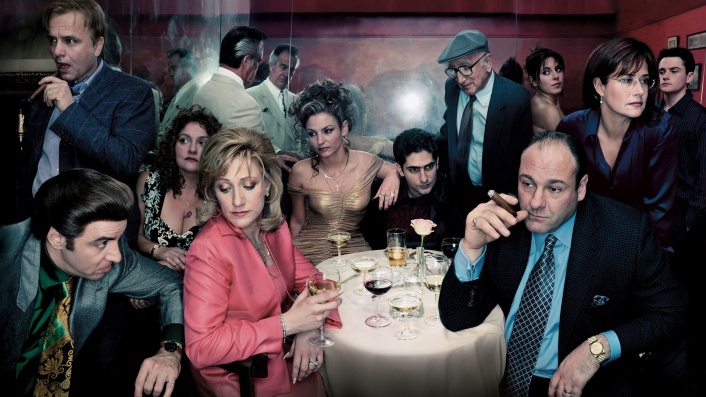 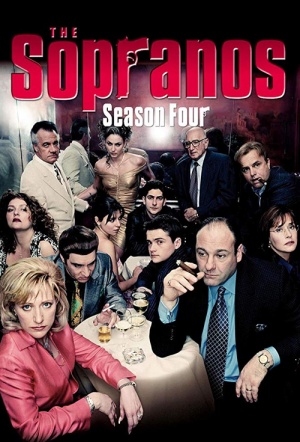 For All Debts Public and Private

Tony invests in a land deal despite Carmela's concerns about money. Junior faces his own financial woes as his trial approaches. Adriana brings her new friend to the Soprano Sunday dinner, but Adriana has no

... MORE idea who Danielle is working for. Tony bonds with Christopher by giving him the opportunity to avenge the murder of his father.LESS
EPISODE 4.2

With Paulie in jail, Christopher becomes acting capo, but he gets off to a bad start with Patsy. Still troubled by Jackie Jr.'s death, Meadow contemplates taking a year off from college to travel. Meanwhile,

... MORE Adriana is in a bind after ending her friendship with Daniele, and Silvio discusses a misunderstanding at a Newark riverfront construction site.LESS
EPISODE 4.3

Silvio and Ralph must take care of a planned protest of the Columbus Day parade by a Native American group. At an Italian pride ladies' lunch, Carmela is embarrassed by anti-Mafia remarks. Meanwhile, Ralph deals

A disparaging remark about his wife sets Johnny Sack off on a vendetta. Meadow decides to do volunteer work at the South Bronx Law Center; Furio hosts a housewarming party for the gang; Silvio and

... MORE Chris make an offer to an old-time hit man named Lou DiMaggio; and Tony and Carmela find themselves at odds over the family's bill-consolidation strategy.LESS
EPISODE 4.5

Checking out Ralph's promising new filly at the track, Tony displays a flair for horse-racing strategy--and discovers an unexpected affinity for the stable life. Adriana finds her rock club being used as a place of

... MORE business for Chris and his pals. Meanwhile, a court artist incurs the wrath of Uncle Junior, and Janice feeds Bobby in his hour of need.LESS
EPISODE 4.6

After hiring an attractive French hostess, Elodi, Artie agrees to loan her brother some money, with interest. Meanwhile, Christopher gets some new responsibilities; Carmela fixes Furio up with an oral hygienist; Anthony Jr. becomes the

... MORE 'dough boy' of a new rich girlfriend; and Tony receives some unsettling news about an old acquaintance.LESS
EPISODE 4.7

Watching Too Much Television

Tony and the gang throw Paulie a Bada Bing bash after his release from jail, but it doesn't take long for old tensions to resurface. Carmela's cousin Brian throws out a hypothetical investment scenario that

... MORE Tony and Ralph attempt to turn into reality with the help of Assemblyman Zellman and a black community leader.LESS
EPISODE 4.8

Paulie takes pains to integrate his mother Nucci into the social world at Green Grove. Meanwhile, Furio faces up to his inner feelings during a trip to Italy to see his ailing father; Ralph introduces

After an aggressive team of reporters lowers the boom on Uncle Junior, his lawyers try a new strategy. Ralph has some fun at the expense of Paulie and his mother, but soon winds up with

At therapy, Tony likens himself to the 'sad clown,' but Melfi doesn't buy into his melancholy portrait. Meanwhile, Carmela drags A.J. with her to Furio's house to offer decorating tips and companionship; Paulie puts the

... MORE finishing touches on some free artwork; and Christopher finds himself at a crossroads.LESS
EPISODE 4.11

After a sitdown with Carmine and Johnny Sack, Tony contemplates the future of the HUD partnership. Meanwhile, Paulie blows off steam with an old pal; Janice starts losing patience with the obsessive Bobby; and Melfi

Tony continues to haggle with Johnny Sack and the two Carmines over the Esplanade profits. Carmela makes a decorating date she can't keep; Furio proves a reluctant companion to Tony on a casino junket; Paulie

... MORE plays an impatient chaperone to some ladies from the nursing home; and Meadow debates the true meaning of a literary classic with her mom.LESS
EPISODE 4.13

In the Season Four finale, Tony and Carmela contemplate purchasing a shore house, but a voice from the past threatens the deal. While Uncle Junior breaks out the Hearty Burgundy, Little Paulie and Benny break

... MORE in a new sound system on the Stugots. With Carmine apparently intent on putting the past behind him, Tony and Johnny Sack weigh their options, carefully.LESS
See all